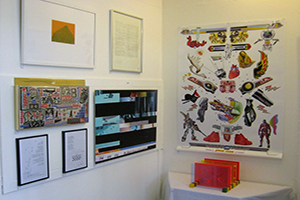 Video games and art? These are two of our favourite things. Together in one exhibition? We had to find out more… Tell us a bit about the exhibition and how it’s come about.
Sharon – Back in the spring, we decided that we wanted to organise and hold an open call exhibition. Michaels work has seen a change of direction this year, and he’s been thinking more about computer games in connection with memory and nostalgia. The brief we set was to submit work inspired by gaming and computers. These days, everyone has some experience of playing video games, and so the brief seemed broad and accessible to everyone.

What range of work can visitors expect?
Sharon – We received a very exciting range of submissions for the exhibition, from a wide range of people. The exhibition contains work by graphic designers and games designers, as well as artists and poets. It has sculpture, digital prints, paintings, drawings, ceramics, and an interactive video game installation. One of our artists, Sally Sheinman, who has two pieces in the exhibition, has just been awarded the Lumen Founders Prize for her digital artwork. The exhibition features 17 pieces of work by 14 artists. What is it about computers and gaming that you find artistically inspiring?
Michael – I’m interested in the way in which you can pull themes from games and turn them into something different. Recently I have been working on gaming inspired poetry, and this was the work that I made for my own contribution to the exhibition. My poetry allows an audience to assess the experience of gaming within a different space and, as such, a different perspective is offered. My poetry seeks to deal with themes found in gaming, rather than gaming itself. These themes might be obscure, only revealed after multiple play-throughs, or they may even be entirely speculative – applying philosophical or fantastical notions to video game characters and mascots.

I also like the social aspect of gaming. For example, I enjoy playing through a role-playing game with someone else, in the same way that you might watch a film together, except that everyone is more involved in the puzzle solving etc. Even playing through a game alone brings you together with others who are on the same gaming journey, as you share your experiences and your progress.

Sharon – For me, the interest lay in the brief itself, rather than any particular aspect of gaming. Because the brief was so broad, it allowed for a wide diversity of work to be submitted, and I was very excited to see what people would send in. Making my own work for the exhibition was a little more challenging, as I’m only a casual gamer, and generally make work based on themes of death and religion, rather than computer games. However, I found inspiration in a game called LIMBO, which I played a few years ago. I thought that the game looked beautiful and found the enigmatic story intriguing. In this way I have found work that compliments my own artistic practice as well as fulfilling the brief. Favourite game?
Michael – My favourite game has got to be Final Fantasy VII. It’s the first game where I really engaged with the story. It was such a big deal when it came out. I would go to school and everyone would be talking about it. It’s a game I feel very nostalgic about.

Sharon – I’m a big fan of the Monkey Island series of games. I love point and click puzzle games, and I hate games where anything jumps out or attacks you, so they are just perfect for me. They’re so well written and funny, and although the graphics may become dated, the playability has stood the test of time.

What’s next?
Michael – The amount of interest and support that the exhibition has received has been amazing. We’re definitely planning another exhibition on a bigger scale, probably next year. We already have lots of artists interested, and we would love to include some of the artists that we sadly had to run down for this years exhibition, due to the restrictions of the space. Planning and organising the open call was a fantastic experience, and we feel that our hard work has paid off.

Interview by Sara Hill.
Image 1. Some of the work in the exhibition
Image 2. Ben Davies demonstrating his installation at the Private View
Image 3. Lost Coast, oil on canvas, by James Moore 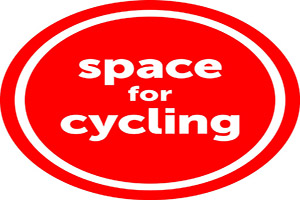 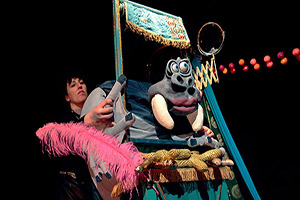 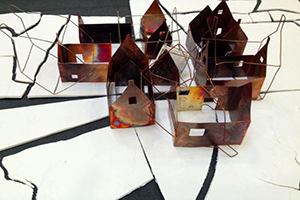