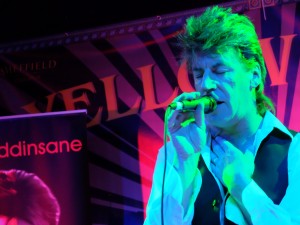 Since January 10th he’s been on the cover of a hundred magazines, has dominated the download charts and has been the subject of art pieces and wall murals across the world (including our very own Division Street, a piece which has – ironically – divided opinions). Yes, I’m speaking about David Bowie, and Sheffield was no different in its effort to get its movers and shakers together to pay their respects to The Starman. In aid of Cavendish Cancer Care and hosted by Yellow Arch Studios tucked away in the industrial hub of Burton Road, the Sound and Vision event sold out weeks in advance as fans raced to get their hands on a ticket to spend the evening celebrating a decade-spanning career, raising a pint to Bowie and in turn raising money for Sheffield’s cancer care.

The night opened with a lively set by well-established tribute band Aladdinsane, with lead singer Paul Henderson – who appeared as Bowie on Stars in Their Eyes back in the ‘90s – pouting and strutting his stuff to Diamond Dogs, Let’s Dance and the more low-key The Man Who Sold the World. The crowd, a mix of both older and younger Bowie fans, had shimmied themselves right up to the stage, all wanting to catch a glimpse of Bowie’s magic, and once or twice – whether in the flick of his hair, or vocals mimicked just right – they did. Many of the faces in the crowd had been painted by in-house artists with the famous Ziggy bolt and a few fans even came in drag in honour of Bowie’s androgynous style. In the smoking area outside, the rain hammered down, but the Nether Edge Pizza Co. still lured the punters out to share a slice or two under the dripping tarpaulin.

In a statement from Rolling Stone magazine, Bowie’s family said the following:  “Just as each and every one of us found something unique in David’s music, we welcome everyone’s celebration of his life as they see fit.” And the Sound and Vision event was just that. A celebration of that unmistakeable ‘uniqueness’ that everyone recognised in Bowie. And although the glittering event may now be over, Cavendish Cancer Care are still accepting donations so that you too can ‘get a pint in for Bowie’.