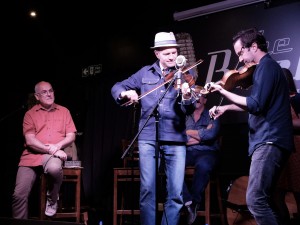 The gig was organised as part of the Talking Gigs series, which has seen the likes of the Vula Viel, Vieux farka Toure, Songhoy Blues and Hyelim Kim perform in intimate venues all around the city since the beginning of this year. Talking Gigs aims to bring “discovery through music”, giving artists a chance to speak about their music, culture and instruments and giving audiences the opportunity to take part in an informal Q&A before the artists then go on to perform. If you haven’t been to one before, think of it as a laid-back cultural exploration, where words and music, artist and audience intertwine and best of all, you get to enjoy it with a pint in hand.

The Cajun Country Revival was no exception to the tremendously popular series, selling out days before. Beginning with an introductory exploration of the roots of Cajun music led by expert in Cajun culture, Graham Breakwell, band members Joe Savoy, Jesse Lége, Nadine Landry and Stephen “Sammy” Lind, were given the chance to give the audience a taste of Cajun culture straight from the horse’s mouth. “What makes Cajun music what it is today is that Louisiana is such a melting pot. It’s between New Orleans and Texas. There’s a lot going on in those places and we’re right between.” – Joel Savoy

Between the audience’s questions instruments were explored, songs were performed in both English and Cajun French and traditional couples dances were taught. If you don’t know the story behind the Cajun culture, with its roots in Acadian, French Canada and musical influences coming from French, Spanish, German and American traditions (to name just a few), look it up. It’s a wonderfully colourful story.

When asked to give an example of how Cajun music was traditionally performed, Grammy award-winning member Joel Savoy replied:

“[People would] be like, ‘Hey, I’m going to have a party this weekend, a house dance.’ They would take all of the furniture out of the house and whoever owned the house would be the ‘door guy’. He’d hire a [couple of] fiddle players, maybe a fiddle player and an accordion, put them up on the kitchen table somewhere in the house and everybody would […] dance in the round.” This quote captures the essence of Cajun music as it was explained in the crowded back room of a small Sheffield pub that evening. It’s the coming together of people, celebrating and lamenting the universal human experience against a backdrop of fiddles, accordions, stomping feet and plenty of that good ol’ moonshine.