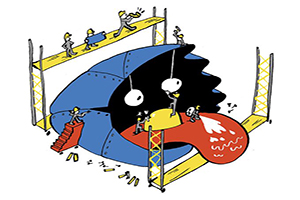 Delicious Clam Records have been a mainstay of the Sheffield music scene since setting up in 2014. The core idea was to offer a cheap and accessible space for budding Sheffield bands to practice and record. The idea quickly took off and Delicious Clam Records is now home to many well-loved bands, including Best Friends, Nai Harvest, Thee Mightees, Thumbuster, Radical Boy, Fruit Bomb. It’s one of the great success stories of Sheffield’s independent music scene, helping many fledgling bands record their first singles and release their debut EPs. Unfortunately, after two years of successful music and mischief-making at their current Sylvester Street home, the record label now faces eviction.

However, the folks at Delicious Clam are not ones to leave quietly and on Friday evening at Picture House Social they got the send-off they deserved. The night saw a number of local bands and DJs put on a great evening of entertainment in the hope of raising some money to help the popular record label find a new home. Kicking things off was the kraut synthpop dystopia of Sammartino. Sporting his signature Mexican wrestling mask Sammartino treated the crowd to songs covering internet culture and conspiracy theories whilst singing in a warbled robotic voice. It was a suitably surreal set from the Tye Die Tapes man who is another artist to be affected by the eviction.

Next up were Delicious Clam signees Thee Mightees. The influences of the band members’ other groups The Hipshakes and Best Friends were evident as they played through a set of fun indie rock tunes. Jangly guitar tracks such as ‘Sometimes’ and ‘Brutal’ shook the crowd into action.

Fentonville Street Band brought a more psychedelic flavour to the evening with their shimmering guitar licks. ‘Shades’, which features on the Delicious Clam Fundraiser Compilation Tape, was a particular highlight.

The headline slot was taken by Drenge who played a typically thunderous set, tearing through songs from their first two albums. The crowd were clearly not lacking in energy after a packed evening of live music and DJs as Drenge’s riff-led music caused several spontaneous mosh pits. The set was the band’s first outing for quite some time, having spent the last few months in the studio working on the follow-up to ‘Undertow’. The trio took the opportunity to try out a new song too which was greeted excitedly by their eager fans, one of whom had travelled 175 miles to be there. Although Eoin was nervous about debuting it live the track showed promising signs for the impending new album. Between songs Rory and Eoin cut in with a few sarcastic comments in regards to the eviction notice; ‘Just what Sheffield needs, a few more luxury student flats!’ The closure of creative hubs, to be replaced with more immediately profitable ventures such as flats and office spaces, is becoming emblematic of local councils up and down the country, who are struggling to meet ever stricter budgets. Unfortunately, Sheffield City Council seems to be following suit but if the support shown at Friday evening’s fundraiser is anything to go by it won’t be long before Delicious Clam find a new home.

If you would like to donate to Delicious Clam Records, you can access their Crowdfunder page here. Dig deep, folks.