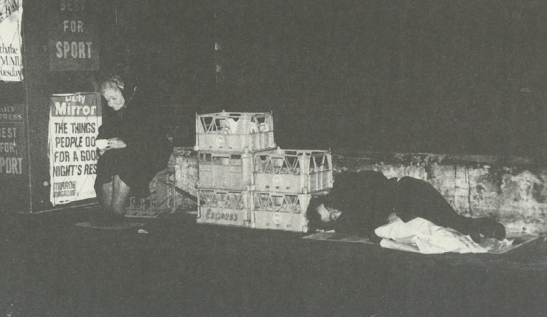 Born and raised in the Black Country during the Depression, Archie Hill described his formative years as “an experience upon the battlefield. The battlefield was life […] along the reek and heat of iron foundries and the thunder of rolling-mills where sheets of steel were pressed and hammered out, and the sulky glower of pitheads stripped the countryside of all except smoke and dust.”

Originally published in 1973, and thereafter suffering libel action which helped nudge it towards obscurity, Hill’s autobiography is surely deserving of a place somewhere between D. H. Lawrence’s Sons and Lovers and Orwell’s Down and Out in Paris and London. Although the work covers over 30 years of his life, Hill’s love-hate relationship with his home turf provides the main focus, a landscape riddled with desperation and violence and poverty. Indeed, almost half the book dwells on his childhood, while the handful of years served overseas in the RAF near the end of WWII are glossed over in just a few pages.

Done with military service but not the hard drinking that allowed him to endure it, Hill fulfilled his childhood ambition of becoming a policeman. He lasted just two years before finding himself dismissed for ‘neglect of duty’ or, as he himself put it in less official terms, “being constantly drunk on duty”. Later diagnosed with ‘chronic alcoholism’, he was sent to an asylum, what must have been a terrifying experience acquiring on the page a kind of bleak clarity: “You’ll put me now on a hard slab and strip me naked and the slab has a trough to it to catch the blood and liquids, then you’ll take up your bloody knife and slit my guts until the sides gape open and you can get to the heart and organs. What’ll you expect my heart to tell you? It was only a pump, only a bloody pump, it won’t pulse in your hands […] nor will it tell you who I hated. So […] pour the bloody mess back into its bone cup and put the lid back on, and stitch, stitch, stitch. And then leave me alone. Because when the flesh is stricken the spirit weeps…”

Escaping the asylum, Hill returned home, where he spent a brief period living rough, subsequently leading to a prison sentence. “I learned nothing from the prison system,” he noted, “except the finer arts of crime and self-defence.”

What followed was an extended period of destitution on the streets of London, until his fortunes took a gradual and sadly abbreviated turn for the better. Despite publishing several more works, he committed suicide in 1986.

That Hill ended his life during the transition from the Industrial Age to the Information Age in no way dates him as a relic of history. Instead, his themes and concerns are as relevant today as they ever were. Behind the phantoms and oases of the virtual world, there is still the very real battlefield of life.

Archie Hill remains a marginal figure in English literature. Hopefully this restored edition of his work will help prevent him from becoming a forgotten one.