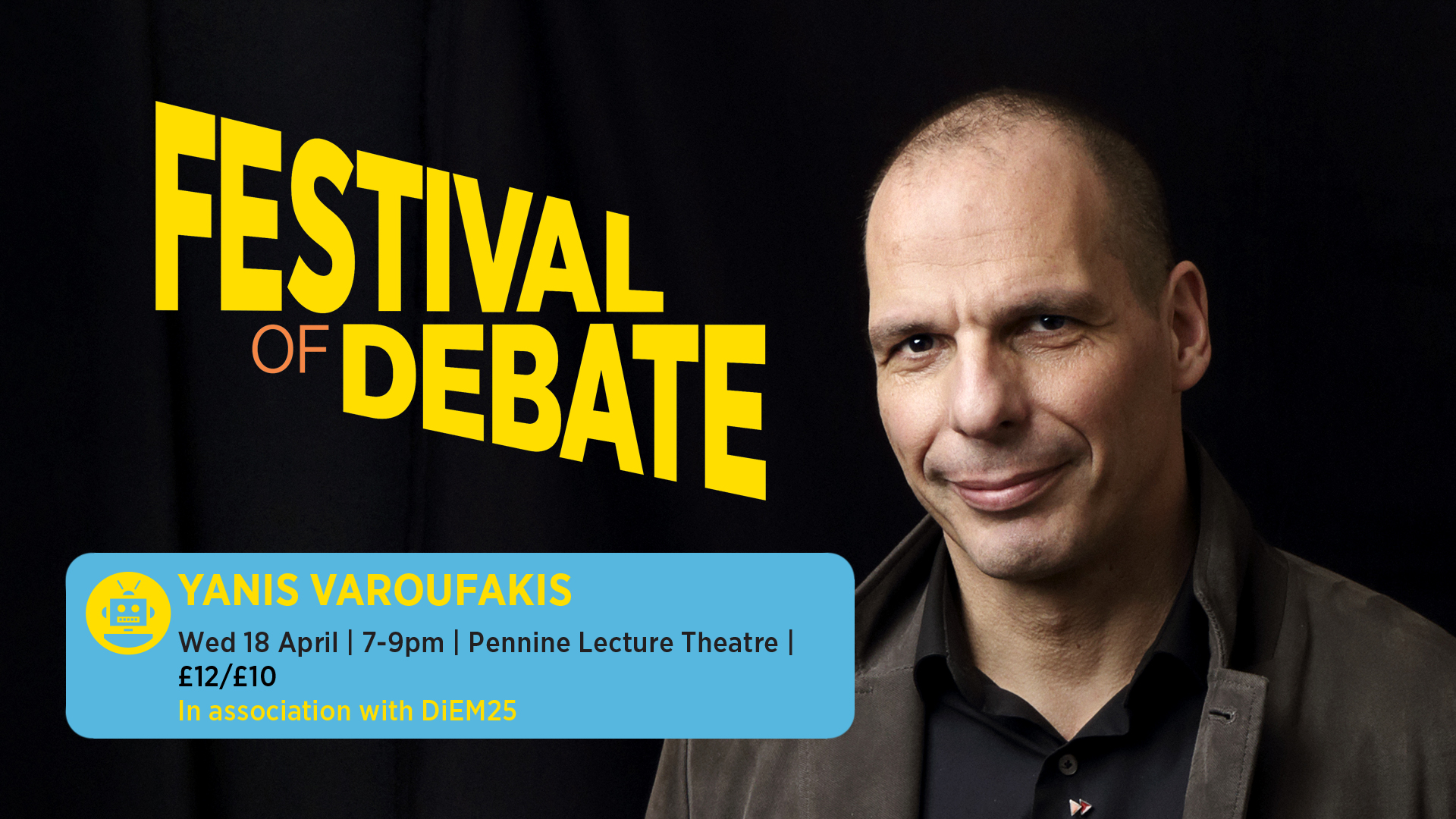 It’s no surprise that Yanis Varoufakis, high-profile Leftie, academic economist and ex-Greek Finance Minister, doesn’t love the EU or globalisation. What we heard on Wednesday 18th April however, was that he doesn’t hate Europe and would replace globalisation with internationalism.

Varoufakis was in Sheffield for the first time, he said, since the steel workers’ strike of the 1980s (producing the first of many rounds of applause from the audience). At the opening event of Festival of Debate, he gave an insight into his vision for a future Europe of democratic collaboration, in a wide-ranging talk covering globalisation, history, politics, Doncaster, Vice-Chancellors, and of course economics. To help achieve this vision, along with other progressive politicians including Jeremy Corbyn, John McDonnell, Caroline Lucas and others such as Brian Eno, DiEM25 (Democracy in Europe Movement) has been created. He has also set up a political party to participate in Greek elections and  MeRA25 (the European Realistic Disobedience Front).

Varoufakis’ criticism of the EU and its institutions was uncompromising: he has called it bureaucratic, callous, a combination of authoritarianism with incompetence. He says ‘It doesn’t even have a democratic deficit, since to have a deficit you need something there in the first place’. The European Parliament is a pretence: in fact, MEPs cannot even propose legislation. And the bureaucratic boudoirs of Europe can be a lonely place – Varoufakis described how alone he felt as Greek Minister of Finance facing his 18 counterparts in the Eurogroup, united in opposing him as he argued against their demands for Greece’s ever-tighter austerity, even though outside the meeting room they expressed a variety of perspectives. The occasional personal insights like this from Yanis gave a picture of someone really trying to do their best for their country, certainly unlike the usual image of a Finance Minister.

Unsurprisingly, Varoufakis talked often about Brexit, one of his main points being that the EU would find a mutually beneficial agreement outrageous since that would signal that a country can leave the EU and still work with them. Certainly he seemed to feel the need to wake us up, and it was refreshing to hear the perspective of a real person who lives on mainland Europe. ‘They have in effect declared war on Britain… They start the negotiations saying “Give us everything we want”, and then they say, “Now tell us what you want”.’

There were moments of humour, in amongst the frustration: ‘Mrs May is making a “Dog’s Brexit” of these negotiations… with her divided, indecisive cabinet not helping the slide towards a harder Brexit.’

From his economist perspective he thinks her proposal that Britain stays in the Customs Union but not the single market would mainly benefit companies like German car manufacturers. Britain has a trade deficit with the EU, and its strength is in services – which are not included in the Customs Union – not manufacturing. He told the audience plans for trade deals with India, China, and the Commonwealth are unrealistic, as they are already embedded in their own economic blocs.

Still, Varoufakis is a ‘Remainer’: Brexit is a tool for the Tories to distract attention from the problems of austerity; it has revitalised the toxic narrative of the British Empire; and he’s a Marxist (Marx was in favour of unification since it speeds up capitalism and therefore hastens its demise). Yanis strongly believes that you need to be inside institutions in order to change them.

But he does have sympathy with those who voted Leave. He talked about the disillusion with politicians, including progressives such as Obama. He also told the story of a person he met during a meeting in Doncaster, who said that she was voting Leave because she wanted David Cameron out of Downing Street to shock the discourse towards change. Listening to a vital spokesperson for the Left in Europe articulate these thoughts is a stark reminder of the frustrations that ‘Remainers’ and ‘Leavers’ do share.

You might think that as a ‘Remainer’ Varoufakis would support a second referendum, however he showed clearly that he thought this would be nonsense, partly because it would be hard to put forward a binary question which made any sense based on where we are now. Then what could Britain do with the result? Whatever the result, it could not stay in the EU on the same terms as before and negotiations would be damaged, to the extent that a hard Brexit would be certain.

Varoufakis showed a good understanding of British politics, possibly enlightened by his viewpoint as an ‘outsider’ and with his knowledge of other European countries to compare with. He talks about the Tory government, like the governments of Macron and Merkel, not being interested in the people of Britain. He explored how the Tories have always been the best class warriors. The Tories may fight with each other, but they unite in class war, and since Margaret Thatcher’s time have only fought for financiers, against the working class and industry. Austerity is a fine example of this, he explained, shifting the private losses of the bankers to the people, ‘socialism of the bankers’. He strongly felt the ‘Labour-Right’ have been appeasers of these class warriors, utilising a fear of change to ‘protect people from the worst excesses’, but at the same time deregulating the City of London on the grounds that a percentage of that wealth (in reality only ‘crumbs’) will fund the welfare state.

Then there’s globalisation, a term coined in 1991 with the increased international trade and exchange in the financial markets and of capital, which now has unlimited power over both the working class and industrialists. Once the system imploded in 2008, the losses fell on the shoulders of the weakest in society, but Varoufakis believes, along with others, that globalisation is dying after the financial crash of 2008. It is experiencing several major crises, irrespective of Brexit. The first is unsustainable private debt; Varoufakis quoted the astonishing statistics, the latest he’d seen, which said that in Britain 50% of people have to use credit cards in order to eat, and non-performing loans make up 53% of GDP.

Another crisis is public debt – a symptom, not the cause, of private debt. Varoufakis said this proves that austerity is “the apotheosis of idiocy” since lack of public expenditure means that there is less private expenditure, which then reduces the tax take… and so on.

Dramatic evidence of the imbalance between industrialists and finance shows that the financial sector in Europe has £3.5 to £4 trillion which is not invested, and hence is doing nothing; even corporations have savings, which, we were told, is nonsense even from a neo-liberal perspective. The corporations fear that if they invest, there won’t be enough demand, but this pessimism is self-fulfilling – if you don’t invest, you can’t create demand.

To this listener, this all evoked a series of interconnected vicious circles. Varoufakis added to these poverty and loneliness, with the divisions caused by Brexit and the fact that the Left is fragmented. A lot of this may have been familiar to people in the Sheffield audience, especially if they have read Varoufakis’ books. However, some of his solutions are new (at least to this writer and others I’ve spoken to).

Varoufakis feels that political action by democrats on an international scale is a moral duty – “Let’s not ignore that duty”. The Left has not been good at combining its efforts. This is where DiEM25 come in, working on the basis of common ideals and entering existing institutions such as national parliaments to “re-calibrate” them and change the narrative. DiEM25’s capacities as a democratic movement could help to heal the rift between ‘Remainers’ and ‘Leavers’ on the Left caused by the referendum, getting them to work together with European colleagues. They will work together with progressives across Europe, ensuring they are not alone as Varoufakis was alone facing the Eurogroup. As for the internationalism under globalisation, it’s the bankers of the world who are united, not the workers. Progressives need to copy the bankers, also working globally but countering globalisation with internationalism. During the Q&A, someone challenged Varoufakis as to how a movement at such a general, European level could fit with local democracy. The reply was that people need to work together at all levels, as some cities are already doing through concerted civic action. Very locally, there were people from the Sheffield branch of DiEM25 in the audience.

DiEM25 will stand in the European Parliament elections next year in spite of their criticisms of the EU, for profile and to change the discourse. They will be campaigning in Britain to stimulate the debate about future relations between Britain and Europe which was not held during the referendum campaign. Varoufakis thinks it should be people who don’t actually want to be politicians who should be candidates. You should be a politician because you want to serve the public, not because you want power – rehashing that concept of duty. Take the example of an academic – why would you suffer many years of poverty to become a low-paid lecturer, if you didn’t love learning? And if you love learning, why would you want to be Head of Department or Vice-Chancellor? A true academic would only do it out of duty was Varoufakis’ answer. “For the pension”, responded someone in the audience.

Meanwhile Varoufakis sees hope in Britain: within Jeremy Corbyn and John McDonnell’s Labour is the only large party in Europe with such people. However, although they are relatively moderate, the establishment still treat them as enemies of the people, so they could be stopped before, or if, they come to power. Corbyn as Prime Minister would face that loneliness – not necessarily in Europe, but in the UK, surrounded by apparatchiks. (Your writer, however, knows that at least some people in the Treasury would support him if they could.)

Perhaps not surprisingly, Varoufakis’ most concrete proposals were to do with the economy. One of these, derived form Labour’s manifesto, is a British Investment Bank, working with other banks such as the European Investment Bank. They would promise to invest, say £600 billion, raised through a bond issue. The central banks would then say they will buy the bonds. In fact, they would not need to do this since their saying it would increase the value and so mean other investors would buy the bonds. Brexit is irrelevant to this – what is important is governments across Europe with the right ideas. When challenged on the question of growth vs ecological survival, Varoufakis replied that it depends on the type of growth. We do not need more consumption of useless things, but need growth in production of solar panels, in social care, in universities – all could be like Cambridge, with 1 to 1 tuition.

Someone asked about Facebook, though I don’t know if this was as a paradigm of life in 2018. The answer: don’t blame it for Brexit, people are more intelligent than that. It could be replaced by a more local system, as in China but under social ownership. And until then: if you don’t like it, delete your account.

Varoufakis has an amazing ability to make complicated issues comprehensible, punctuating them with stories, local awareness and jokes targeted at this particular audience. Someone commented that he presents economics in a way that is accessible to younger people who have only known neo-liberalism. The enthusiasm with which his references to the past as well as DiEM25’s ideas for the future were greeted was evidence that older people might feel the same. Varoufakis has called the mood in Britain “despondent”. The mood in the Lecture Theatre as applause broke out certainly suggested that his talk had lifted some of that gloom.