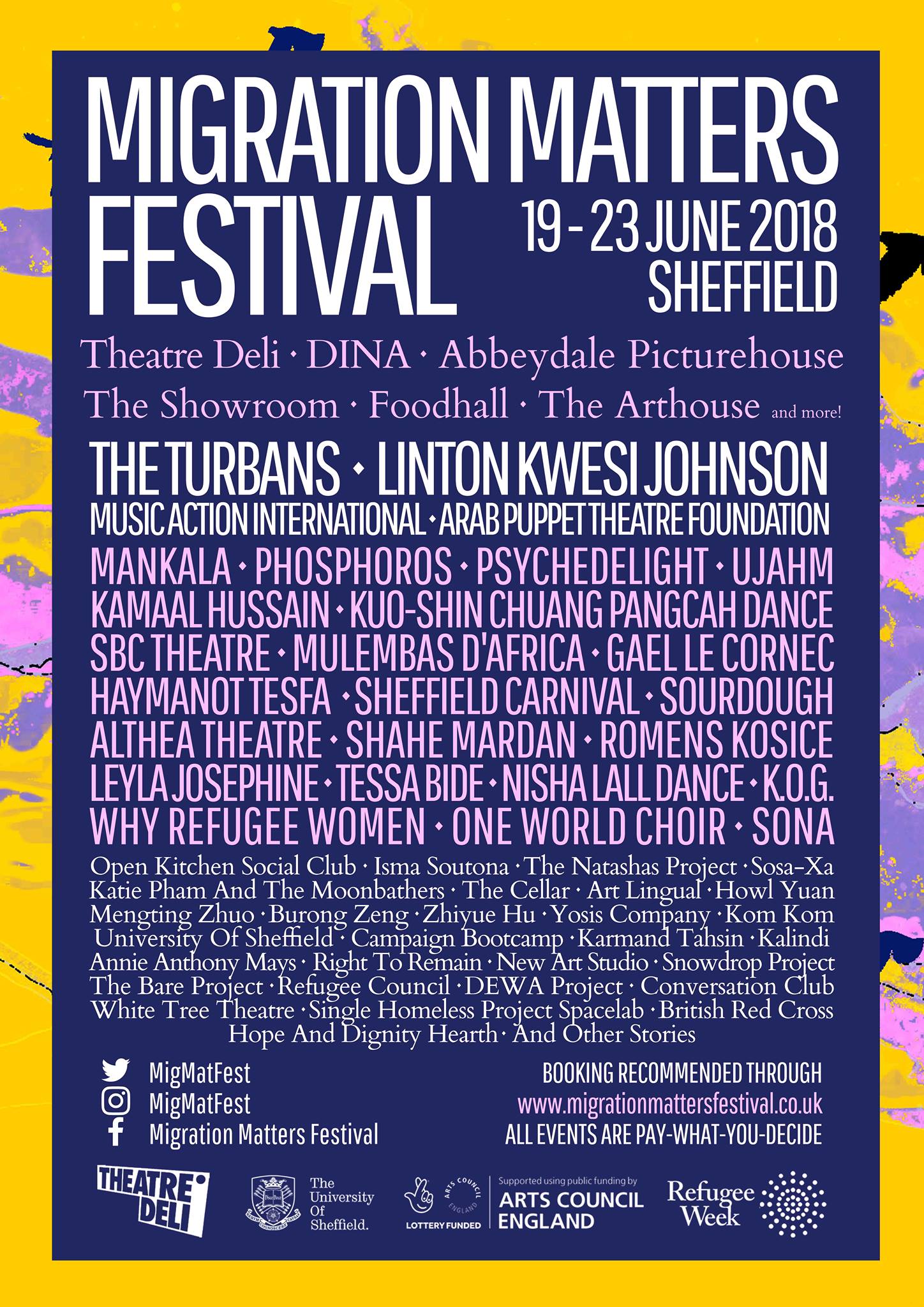 Sheffield is a city full of different cultures living alongside each other, and Migration Matters Festival celebrates this diversity from the 19–24 June. It also coincides with Refugee Week which is celebrating its 20th anniversary across the UK. There will be events across the city, in venues including Theatre Deli, The Art House, DINA, Sheffield Theatres, the Showroom Cinema, The Sanctuary and Abbeydale Picture House. The Festival follows a ‘pay-what-you-decide’ policy, meaning festival-goers donate what they can but it’s still best to reserve your tickets because with such a great line-up venues will be jam-packed.

Kicking off Migration Matters is the opening party: across five and a half hours Theatre Deli will host a line-up of incredible global acts, including the One World Choir, a group of talented singers made up of refugees, asylum seekers and members of the local community. Joining them are Open Kitchen Social Club,  who will be providing food from around the world for the evening. Special guests are The Turbans presenting their live show depicting the experience and passion of musical explorers from across the world. They are inspired by ancient melodies gathered from countries including Bulgaria, Iran and Greece (plus many more), using these as starting points to create original music for the contemporary age. You can see the whole line-up performing at Theatre Deli on Tuesday here. It’s one not to be missed.

The British Red Cross will host a Refugee Awareness Workshop on Thursday lunchtime, aiming to arm people with the facts surrounding refugees and the refugee crisis. They’ll be answering questions such as ‘which country in Europe received the highest number of asylum applications last year?’ and ‘how much money does a single asylum seeker receive from the Government each week?’ They will also outline who refugees and asylum seekers are, where they come from and how the British Red Cross, as well as us, can help. Following this event, over at DINA, Why Refugee Women are performing the Ubuntu Fashion Show & Food Event, taking inspiration from the international communities in Sheffield. The performance is drawn from the city’s cosmopolitan culture and includes traditional food passed through generations.

On the Friday, Campaign Bootcamp will take over The Sanctuary on Chapel Walk for their Everyday Activism workshop from 3–5pm. They want to teach the community how to take back power, helping people work out which issues are important to them and how to get involved with campaigning. They centre on marginalised voices, the ones who need to be heard for meaningful things to happen, and they want to teach you how to help.

The closing party promises to be just as lively as the opening, back to Theatre Deli to celebrate into the early hours, with Open Kitchen Social Club returning to keep your belly full. Nisha Lall Dance will be using Indian and other international dance styles to tell stories, and not to be missed is Kom Kom, ‘Sheffield’s queen of Soca’ bringing the carnival ’til end the night.

This is just a selection of what the week has to offer, head over to their website to find out more and check out the trailer here – it shows the Festival for what it really is – a party for all to get involved with, no matter your heritage, age, gender or race.