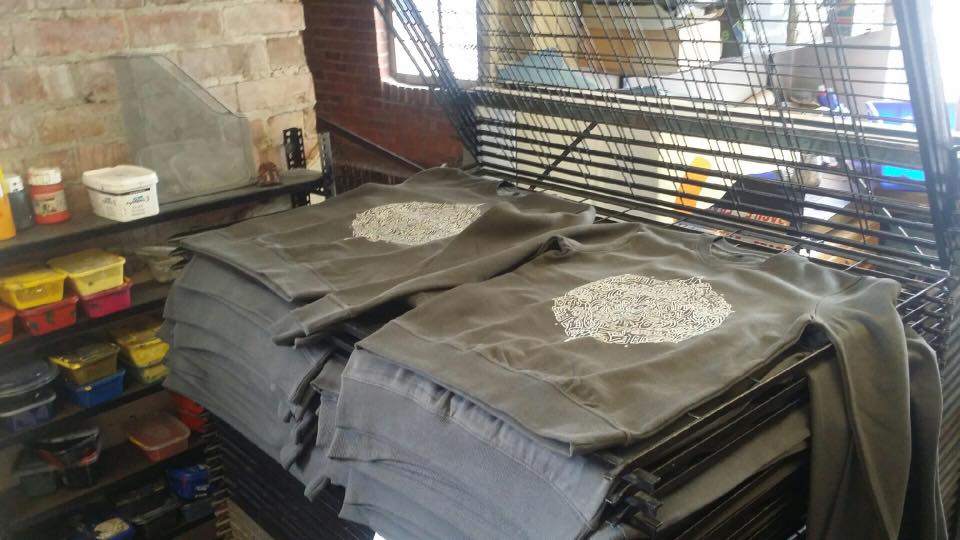 Bodhikah is a Sheffield-based clothing brand which creates ethical, screen-printed apparel. Founded by 26-year-old artist Bevin Richardson, the independent brand is based in a studio in Kelham Island and takes inspiration from the surreal in the form of beautifully intricate, monochrome illustrations.

As well as screen printing, you also paint murals, illustrate books, and do live painting. How did you get into art?
There’s been a number of people in my life, such as my old school teacher; Killian Voss and my grandmother Lenore Bergstrom, to name but two, who have inspired me and helped me onto the path I am now on. I have always felt lucky though in that I have never wondered about what to do with my time on this planet. Granted the direction and method of creation have changed and taken me to different places, but there’s always been that same creative drive behind everything. You say that the designs you create for Bodhikah ‘delve into the realms of the mind’, is this an idea that influences all of your art?
For a few years now I have followed the direction of automatism, which has transferred into my painting, book-making and of course, into Bodhikah. I’ve come to realise I’d been working in an automatic way before I truly understood what it was and when I realised this, it really helped contextualise what I was doing. I find it comes very naturally, especially in relation to pattern work. It’s as though I’m not ‘creator’ but instead watch the patterns grow and develop, guiding them as they emerge.

When did you have the idea to begin a clothing brand?
It was when I was at college that I first had the idea to create t-shirts but the reality of production made it unrealistic. It wasn’t until after university, when I really developed the pattern side of my work, that I realised I needed an outlet. And so eventually I found myself back at the idea of creating unique clothing, but this time with the knowledge and skills to make it a reality. What’s the ethical ethos behind Bodhikah?
The clothing industry is one of the worst for the environment and I believe it’s time, now that we have all the necessary technology, to be responsible for our surroundings and make clothing that is not to the detriment of the planet or to other people. I don’t want anyone to be hurt, hence I use water-based inks and do research on each of my suppliers. I completely disagree with the throwaway fashion culture that is so prominent in the UK and hope that by making limited edition designs and choosing quality over quantity, we can evolve from the madding industry that exists.

You had a stall at the last Peddler Night Market, where else can people find your products?
I have been selling in a couple of shops in Sheffield which has been great, but I’m always looking for more outlets. Ideally, I’d like to sell through independent shops around the UK. I also really want to get the online store working fully. Other than that, I’m currently looking at doing some limited edition designs in collaboration with The Beer Engine, which I’m really looking forward to. What does 2017 hold for Bodhikah?
Hopefully many more markets, much more of an online presence and further developments on the product front – ceramics for example – which is something I’m creating at the moment.

Final words of wisdom?
Things don’t always happen in the way you want them to but that’s half the fun of it, right?